It's been awhile, but here we finally are with the penultimate Stacked Earrings Challenge! I think we can blame the holidays. Hopefully the last one will be sooner than later.

This time, it was Rebecca Anderson who sent the big batch of beads. Rebecca is famous for Czech glass and flowers, turquoise and red. So it wasn't a huge surprise when I opened the package. A thrill, yes--because I always love the beads she works with--but not a huge surprise. I couldn't wait to get started! 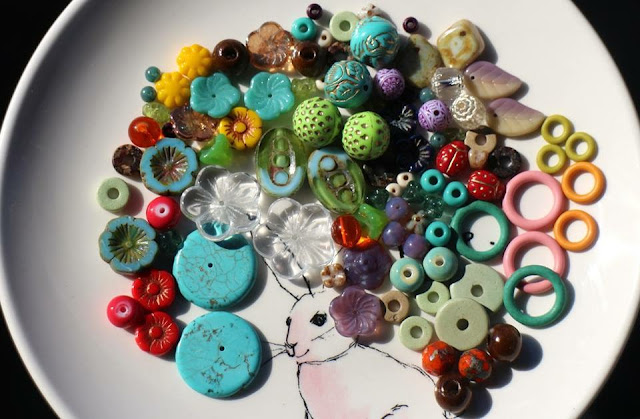 The first pair I made the day the package came. I apologize for the crazy background, but it was almost impossible to get a good photo of them with a white background. Such is the curse of clear glass beads. The only beads in here that were mine are the tiny crystals on top, the turquoise piggies (under the crystals at the top if you don't know what piggies are), and the white saucery discs in the middle. I like that the earwire is the same piece that has all the beads stacked on it. I don't do that often, but I'm generally pretty excited about it when I do. 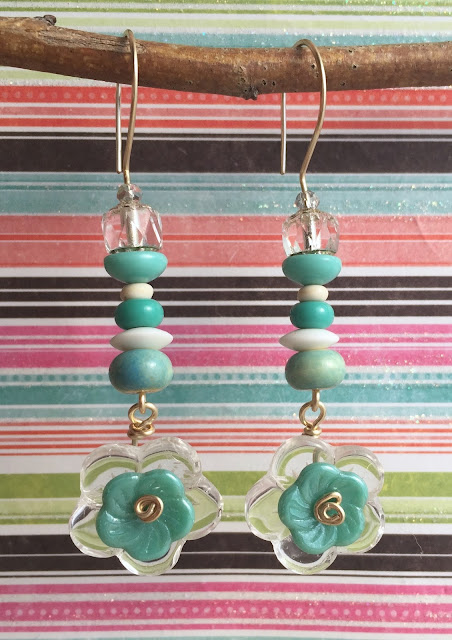 Next, I made these. It is not a coincidence that I made both turquoise pairs first; I love the color as much as Rebecca does. I think the big beads with the gold were the first ones I noticed when I opened the box. They are super cute--and they finally, FINALLY gave me a reason to use those dangly arrow things I'd been hoarding for years. I was most excited about that, and I'm very happy with the way they came out. To me, they look like a combo of mid-Century Greek styling meets retro-future (a la the Jetsons). I think my grandmother would have liked these. And since her jewelry collection is what started my whole jewelry making adventure, I'd say that's a good thing. Only the metal beads and the aforementioned dangles were my own. 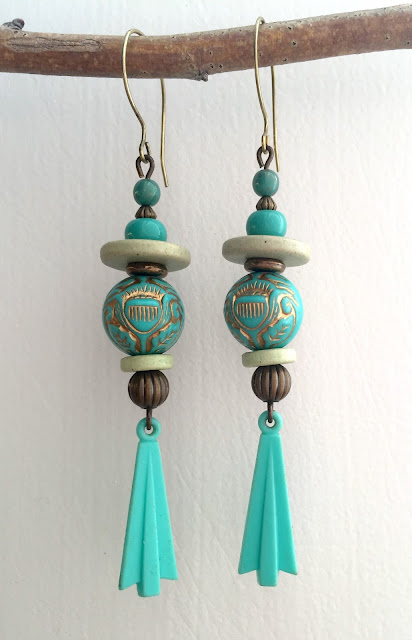 The next ones I made were these. I generally try to avoid this many brights in one piece--especially all the primary colors--but it works. I am now seeing those red beads toward the top as little fire hydrants, haha. I think they are supposed to be flowers? Either way, those were mine. As are the little yellows on top and the turquoise discs halfway down, and everything that's gold. I would never have used gold but for the gold on the ladybugs. I think it works though. I also think these would be really great earrings for a kindergarten teacher. Or very early elementary school. F is for Flower. L is for Ladybug. H is for Hydrant... yeah okay, it's still very early and I didn't get a lot of sleep, nor have I had my coffee yet. As an aside, I'm planning to make my iced coffee this morning with sparkling water. Good idea or bad? We shall see... 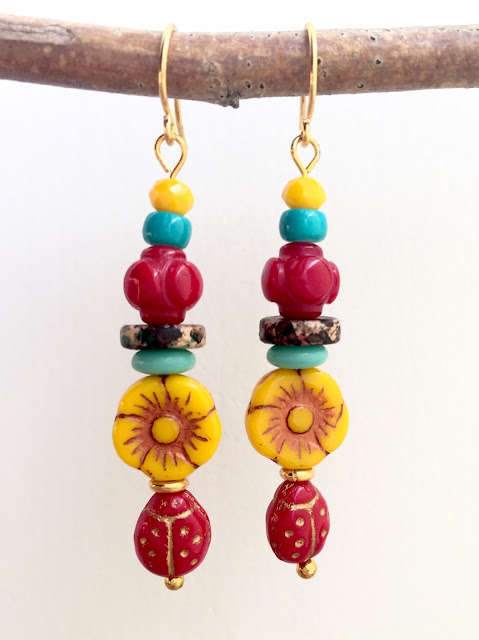 On to the next ones. Another pair that called for using something that had been waiting patiently for a long time. These orange tubes seemed like a brilliant idea when I bought them, but I never could make them work until now. Because orange and purple go together so naturally, right? But the leaves at the bottom said so. Or at least one of them did. And who am I to deny the leaf? And it worked! Seriously, I would never have put lavender and screaming bright orange together. I'm sure there's a floral dress out there that was made to go with these earrings. Only the tubes and the copper spacers are mine. I ran out of my ball end headpins and haven't felt up to making more, so I made these twisty end ear wires instead. They're cute but one of these days, I'm going to have to break out the torch and make more ball end pins. 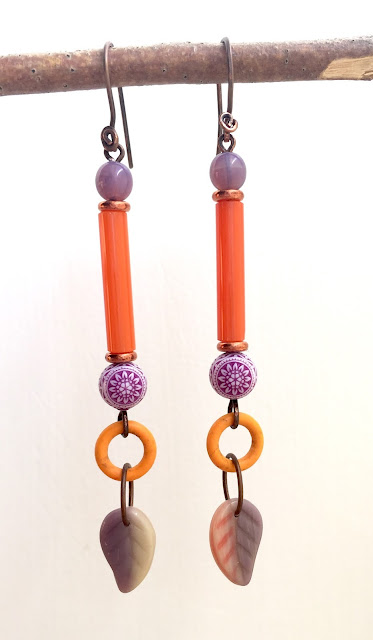 The next pair is the I'm pushing on, but I'm not particularly inspired pair. I love the pea pod style bead. I've had some dark red ones for probably five years and I'm not sure I've ever used them. I just don't ever feel like I have a good idea for them. But here these were, and by George, I was going to use them! And the hole didn't run through quite straight on the right one, but I used it anyway. I really feel like these were forced though. I just can't get excited about them, alas. Only the light blue beads on top and the metal bits are mine. I think I just had creative fatigue at the time, and the holidays were coming and I had so much to do (like have shoulder surgery again, so I was really trying to just make one more pair). At this point, I said I was done. 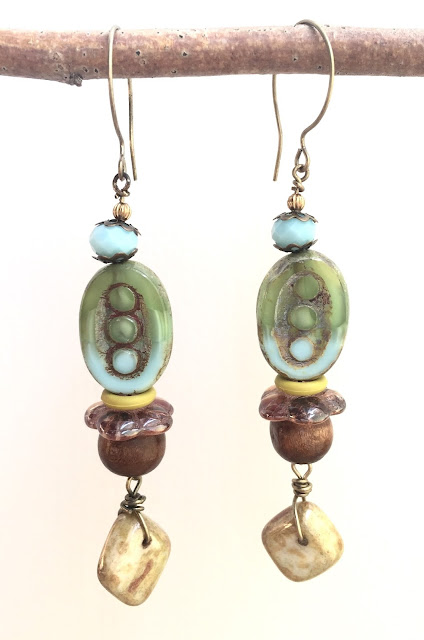 But then a month or so passed after my shoulder surgery, and no one had said anything about a reveal date. And I was really itching to get back to my bead table. I'd even gone to a gem and bead show a couple of days after I got my sling off, but I didn't have the strength to bend wires or anything. All I could do was look at all my pretty new beads and put them in organizers and dream. After another week or so, I started small. Just a simple pair of earrings wore me out. But I managed these. Fortunately I'd made the earwires previously. I did not use any of my new goodies, but rather these old palm wood beads. Just they and the copper beads are mine. After that, I really was done. 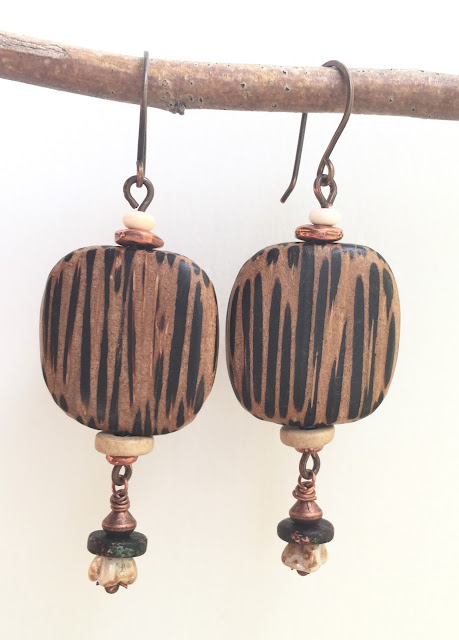 I am very disappointed that I couldn't come up with something for the big blue flowers or the green/gold speckled beads. But I will use them eventually because I love them. Also, I am at a loss when it comes to using the larger rubber rings. I'm sure when I see what everyone else did with them, I will roll my eyes at myself. They were just too challenging for me! As were the huge turquoise discs. I know everyone else likes to go vertical with those, but I can never seem to make it work. Now I am off to see what all the other ladies made so I can ooh and ahh and perhaps figure out what in the heck to do with the beads that were troubling me. Now you go look at what they made too. Links to their pages follow. Thanks for stopping by! 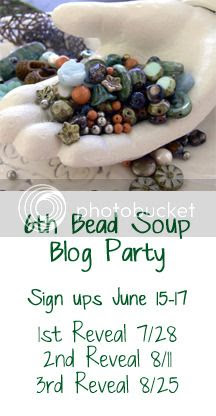 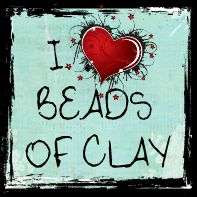