***EDIT*** Sadly, I got confirmation from the artist himself that nope, he had nothing to do with this. And then someone pointed out that it was probably done for display purposes at a record store at the time. That seems so obvious now, I don't know why I didn't see that right away. Oh well, it's still cool looking and looks great in my living room, so I can't complain too much. ***END EDIT***

Remember that piece of artwork I was hoping to win at the Art Auction I mentioned a couple of blogs ago? Well, I won. I really expected to get outbid by some ridiculous amount of money, but it didn't happen. I guess it was just the wrong demographic, because the right person would have done that. There was only a little competition, and I got it for a totally reasonable price!

I know you're all wondering what it is, aren't you? It is (allegedly) the original mock-up artwork for David Bowie's Scary Monsters (and Super Creeps) album. I have NO idea what on earth that was doing at an auction house in New Orleans for the last 20 years, but there it was. It was discovered a few months ago, and donated to the PBS Art Auction where I have been volunteering for the past several years. It's like it was meant for me!

So here it is: 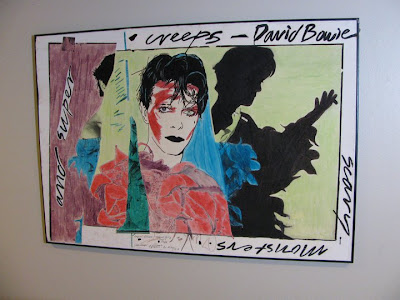 And here I am next to it so you can see how huge it is. 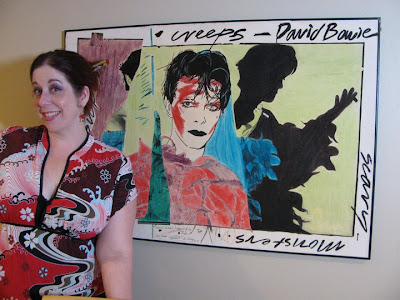 I seriously cannot believe I own this. I've loved David Bowie as long as I can remember. When I was 16, I saw him on the Glass Spiders tour. I was smashed against the stage, and he came over to the edge and pointed his finger, waving it around searching for The One, and that was me! He grabbed my hand and held it and sang to me for a minute or so, then quickly whipped his hand back ignoring all the other people who were trying to get what I got. Some random guy standing next to me turned and shouted, "HE touched YOU!!!" voicing my exact feelings. And it was almost as exciting last night when the Auctioneer banged the gavel down and cried SOLD!
Posted by Heidi Post at 12:07 PM