An advantage of living on the 3rd floor

There's this stupid dove that lives in the tree right outside of our front door. Doves are pretty stupid in general, but this one really takes the cake. A couple of months ago, I watched him as he repeatedly tried to fly upward and away as Craz and I were coming back from a late night walk. But it took him about 10 tries to realize that upward = ceiling. He flew into it numerous times totally panicking until he figured out that he might want to try a different route. Well this morning, he was sitting there picking at the leafless branches for some reason, and he was eying us with suspicion as we walked along the balcony to the door. He didn't stop his frenzied picking though. So I grabbed my camera and went back out to shoot him. After a few shots, he flailed until he landed on a further branch - there is no grace in the way this dove flies - and continued tearing at the branches. 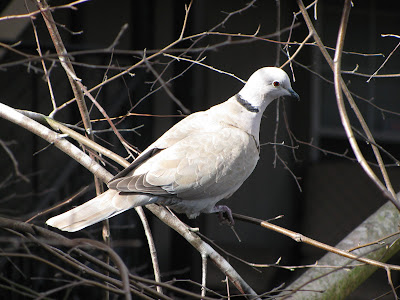 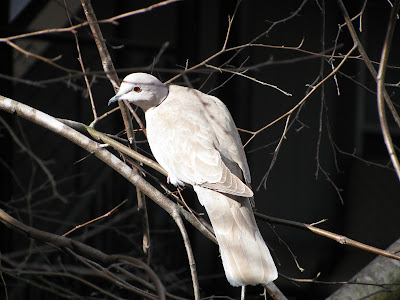 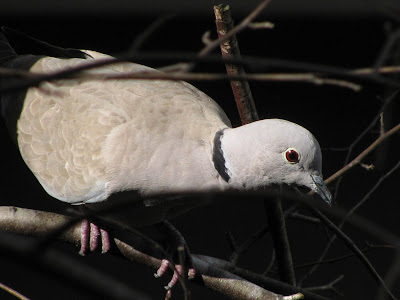 Meanwhile, in jewelry land, I finally made it to Michael's yesterday to investigate their advertised "over 1300 new styles!" of Bead Gallery beads - for 50% off. Wow! It was hard to keep myself in check. I managed to limit myself to 26 strands, and a few of those were even duplicates. I could have gone crazy if I'd let myself - but I was trying to behave. And I got out for just under $100, so that's not bad at all!

I was DYING to make something, but I decided that  the first order of business was proper organization. My storage containers need to be sorted by color and not date of purchase. So that took a couple of hours. Then it was time for a nap. I've had a sinus infection since Thursday, and I am hardly taking it as easy as I should be. In fact once I'm done here, I need to go lie down and watch bad TV for the rest of the day. Forcing myself to work when I'm sick will not help me get better, nor will I create anything wonderful when I have to stop and sneeze every 3 minutes.

While I had my camera out though, I took some pictures of a bracelet I finished Friday night. I'd been working sporadically on it all week. The clasp is sterling and was darkened in Liver of Sulfur last weekend - that was my first experiment and what fun it was! The focal was one of my grandmother's shoe clips. I've been picking it up for ages and putting it down waiting for the right inspiration to strike. I'm mostly pleased with this result, but due to faulty "math" it's a lot smaller than I wanted. I can get it on, but I want it to be looser. My wrists aren't particularly big, but this would do much better on a petite waify sized person. I'm sure there are plenty of them out there lamenting that every bracelet they try on is too big. Hopefully, the right person will find it. And I have one more buckle and clasp for another try - but I think I'll do that one with wire instead of strung like this one. That way, if I need to add to it, it won't require a complete redo. 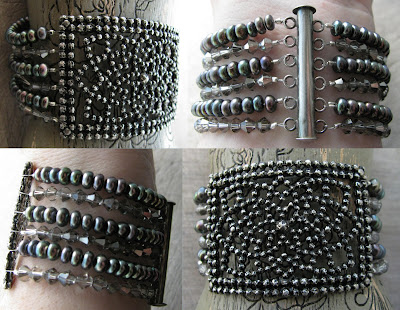 And for those of you who were wondering, my dog had her stitches removed yesterday and all is well! Thank all of you for your kind words for her this week!
Posted by Heidi Post at 11:54 AM