The knobs for my display arrived Thursday, and after many failed attempts at geometry, I just gave up and eyeballed their placement. I decided it would probably be a smart move to prime the thing first. The cheapo 2/$1 craft paint I got at Michael's (mainly because it was called Robin's Egg Blue) was never going to cover all that stained brown wood. I got some primer at Lowe's, and gave it 3-4 coats before most of the brown was covered. Then it got at least the same number of coats of the blue. It was flat and hideous but yee haw, I remembered I had almost a full thing of Mod Podge somewhere in my art supply closet. A few coats of that, and at last! I'm pleased enough. I still have to clean up the edges where the primer/blue/Mod Podge accidentally landed. Here's a photo of the nearly end result. 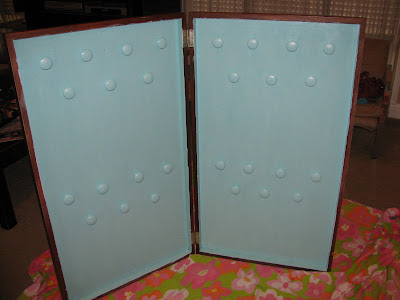 I also priced all the jewelry that wasn't priced yet, and put 20 or more pairs of earrings on their cards and labeled & bagged them. And in the meantime, I tried to make more necklaces. Only one bracelet (after my vow last blog to make more, but I discovered I had more than I realized). 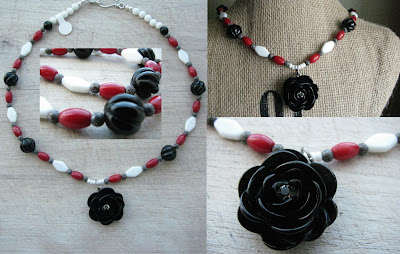 The white beads are vintage, everything else is new - I've only got one more of these flowers left. I bought 4 a few years ago. I'm glad I didn't use them all up at once. I originally made this necklace with a different pendant, but decided it was a bad match. The necklace has been hanging around for a month until I finally made the connection that this flower would work. A friend of mine pointed out that the other black beads on the necklace sort of looked like they may be closed buds of more flowers. Never would have seen that, but I like it! 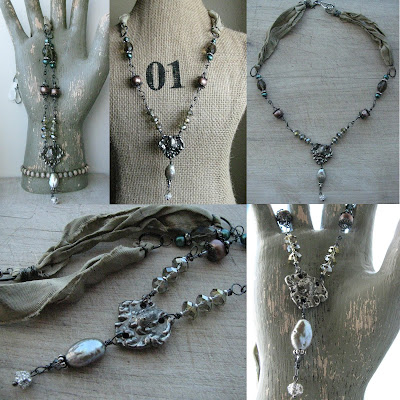 Another beautiful Lynn Davis connector, various pearls, rhinestone, glass beads, wire & sari ribbon. I started it, got frustrated, slept on it. Kept going, got frustrated again, slept on it once more and finally finished it on the third try. Guess the 3rd time really is a charm! 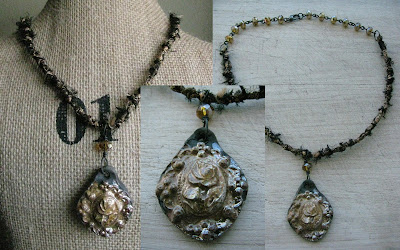 Another gorgeous raku pendant by Jessi of Ecclectic Trinkets, some knotted sari, sparkly crystals which perfectly complement the pendant, and annealed steel wire. That wire is SO hard to bend, and my right thumb/hand joint is crying today. 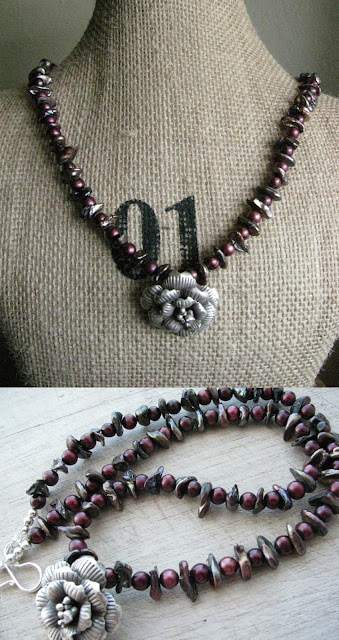 I usually try not to make things like this: pearls all around and a silver pendant. It's so common around here, though the pendant is usually some New Orleans themed item, but I had the (Hill Tribe) pendant and I had the pearls, and I can guarantee that it will go over well with my sister and her friends next week. They may be weirded out by all my sari and copper, but they'll at least like this. 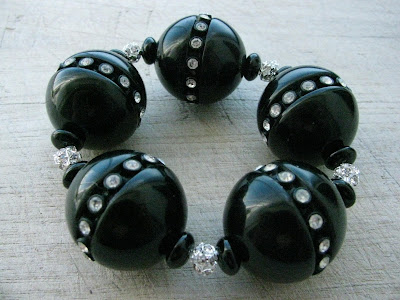 I've had these black rhinestone balls for awhile, but haven't been able to figure out what to do with them until last night. They're pretty heavy, so I have 3 strands of stretch cord through them. And it is for someone with a very thin wrist. I made this one a few times over before I found the right combo to make it wearable for someone!