Creations from the Treasure Box

Remember the treasure box my friend Heather sent me recently? Did I mention that was the second one she's sent? She said she's been trying to identify pieces parts from the first box she sent, but she won't have any problem here. MOST of what's included in the following pieces comes from her new box, and one teeny little thing came from the first box. 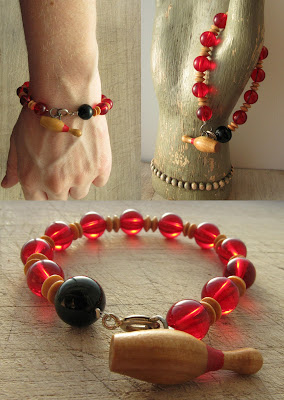 That little bowling pin was from the first box. It was precious, and I'd been dying to use it, but the right beads never presented themselves until the second box. The vintage red lucite beads and the little wooden spacers were just perfect. I added a little black "bowling ball," and even used a clasp that came from the second box. 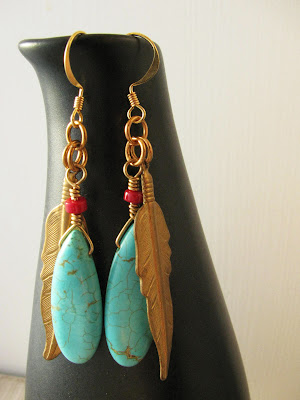 The big gold tone feathers here came from the treasure box as well. I'd already had the turquoise drops from a recent Michael's spree. 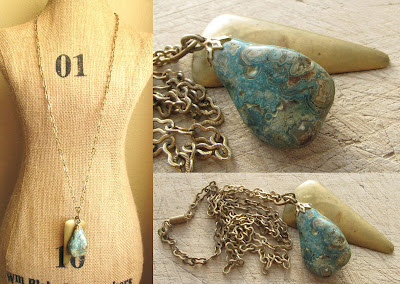 Everything here came from the box. The big triangular piece was from a huge earring, I don't remember if the chain was all by itself, or if there was something on it which I removed. Finally, the stone (some sort of jasper, I believe), was from a key chain. There is a bit of yellowed glue attaching it to the bail. I tried to remove it, but realized it was stuck on there for all of eternity, so I might as well accept the glue. It's a funky casual jeans & a tank top kinda necklace. 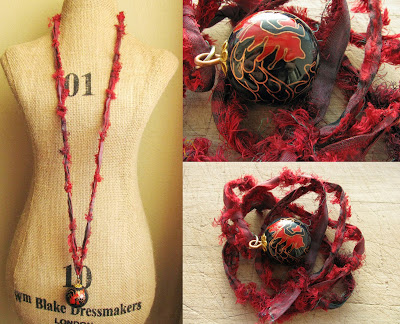 Finally, the enameled bell. A good friend of mine in college had one of these bells in silver; it was the first like it I'd ever seen and I always thought it was was super cool. I don't know that I've ever seen an enameled one,  so I was particularly excited to discover this one in the box. It was tough to capture in the photos, but it's not really black, it's a dark, tealy-blue ink color. Conveniently, I had this piece of sari ribbon that was just the right colors. I knotted it every inch or so, attached the bell and ta da! Instant necklace. I love it! It's another one I think I could easily steal from myself if I don't sell it quickly.

There was another bracelet that came from finds in the box, but one of my sisters saw it last weekend and insisted she just had to buy it. I tried to give it to her, but she wouldn't hear of it. So buy it she did, but it got away without being photographed. Oh well, I know where it is if I ever need to see it again.

So there you go, Heather. The spoils of your box(es)! I have much much more to do; these were just the things that jumped right out at me. I hope everyone else has enjoyed seeing them as much as I enjoyed discovering and then using them.