With a little help from my friends...

Ever have one of those pieces about which you just CANNOT make up your mind? I'm a huge fan of Lynn Davis's gorgeous connectors (btw, she's currently having a 10% off sale). They always beg me for pearls, wire wrapping, and sparkly beads. Two of my favorite pieces I've ever made are with her connectors. This and this. So in this latest piece, I was going for more of the same, but I wanted to mix it up a bit. I was relatively happy with the main part, but I was fairly certain that the dangle was all wrong. 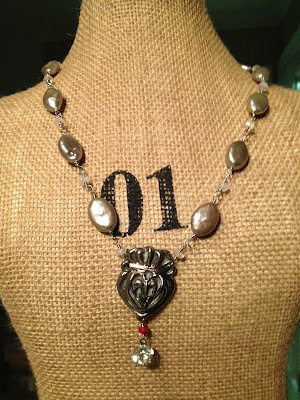 It's hard to tell, but that's a teeny faceted ruby above the rhinestone. I often wish those rubies were redder than pink. And I didn't have any garnet cut the right way. I was hearing various fellow bloggers' voices in my head, "don't be a perfectionist! don't be too precious! don't stress over every little detail!" and it was late and I was tired, so I just let it go. But every time I looked at it, it disappointed me more than it thrilled me. But then I didn't know if it was just me or I was being too picky.

So I snapped this photo with my iPhone and emailed it to Rebecca and Malin, who have become good friends whose styles I love and opinions I trust. They both agreed that they liked the idea of a group email confab to help when someone's stuck. I'm so glad, as I didn't want to seem a pest ;)

They both offered completely differing ideas, but they also both agreed it could be improved. Obviously, my inner voice was correct - and I was so glad to have their input. Rebecca suggested dangles (which she liked from another recent necklace I'd made) in either moonstone or ruby or both, as well as adding more to the dangle at the bottom. Malin suggested getting rid of the ruby altogether, and stacking some pearls and moonstones as a new dangle.

I thought about it and combined both of their ideas - but not necessarily exactly how they were describing them. Of course I can't picture what was in their minds and they don't know my stash, but I had a plan and I got busy. I stayed up a little later than I wanted to to finish it (who here hasn't done that a million times?), et Voila! I think it looks a lot better!

Thank you so much, ladies, for your input! 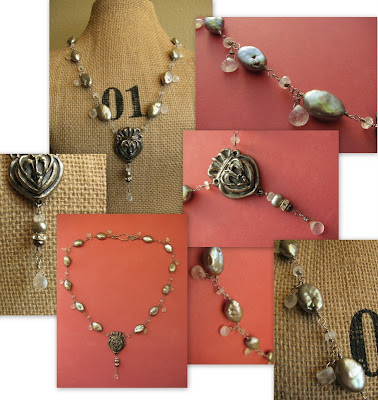